Ask the Vet: Why Does My Cat Roll Over When He Sees Me?

HomeBlogAsk The VetAsk the Vet: Why Does My Cat Roll Over When He...

Ask the Vet: Why Does My Cat Roll Over When He Sees Me? 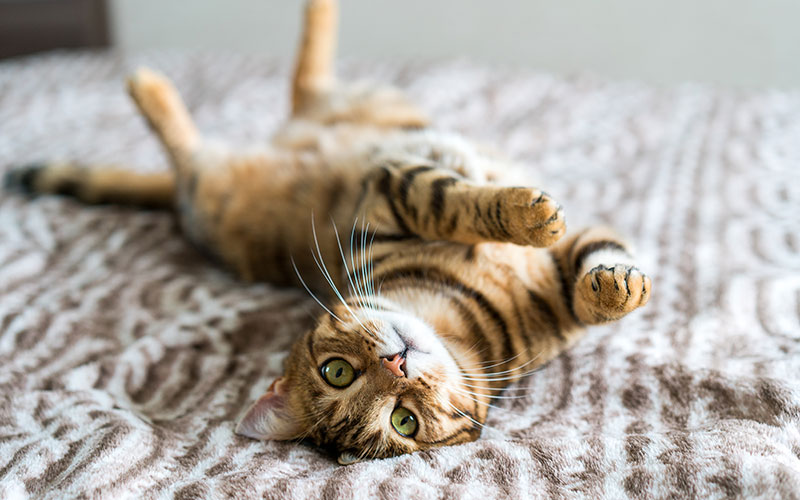 Although your cat may typically adopt an elegant, refined demeanor and posture, they may also occasionally surprise you and do something quite out of the ordinary — such as rolling over and shimmying on their back when they see you.

So, what’s with the dance?

As it turns out, there isn’t one firm reason for the roll over move. Instead, we veterinarians and other animal scientists can only make educated conjectures about this unique feline behavior.

What It Could Be

If you notice your cat showing their belly when they first see you — after school or work, for example — it’s probably a sign that they’re happy to see you and want some attention. Think of it as excitement and a sign of love.

Some animal behaviorists suggest that unspayed female cats may roll on their backs as a mating behavior, specifically as a post-coital routine. If you suspect this is the case for your unspayed female cat, don’t attempt to touch or pick up your cat until she’s calmed down.

The scratching of an itch

A basic explanation for the shimmy cats sometimes do on their backs is that they’re simply scratching an itch. It can also feel good to cats to simply stretch on the floor as we humans might stretch in bed after a good night’s rest.

In rare cases, cats may roll onto their backs to scratch an itch that is related to a medical problem. Likely, this would only be the case if you noticed them rolling onto and scratching their back in conjunction with other symptoms, such as redness, bumps, hair loss, or additional scratching elsewhere.

What It’s Almost Surely Not

A solicitation for a belly rub

Although it may appear that your cat wants a belly rub when they lay on their back, this is the one possibility that is rather unlikely. Dogs who lay on their backs? Yes, they would probably appreciate a good belly rub. But cats? More than likely, no.

That’s because cats tend to be protective of their stomachs, mostly because directly beneath their soft underbellies are their sensitive organs.

While it’s rare, if you believe your cat may rolling on their back because of a related illness or injury, we recommend booking an immediate appointment with a vet who can examine their physical state and behavior.

Contact Sunset Veterinary Clinic today at (405) 844-2888 to schedule your appointment.