Pet and Animal Movies Coming in 2019

HomeBlogCatsPet and Animal Movies Coming in 2019

Pet and Animal Movies Coming in 2019 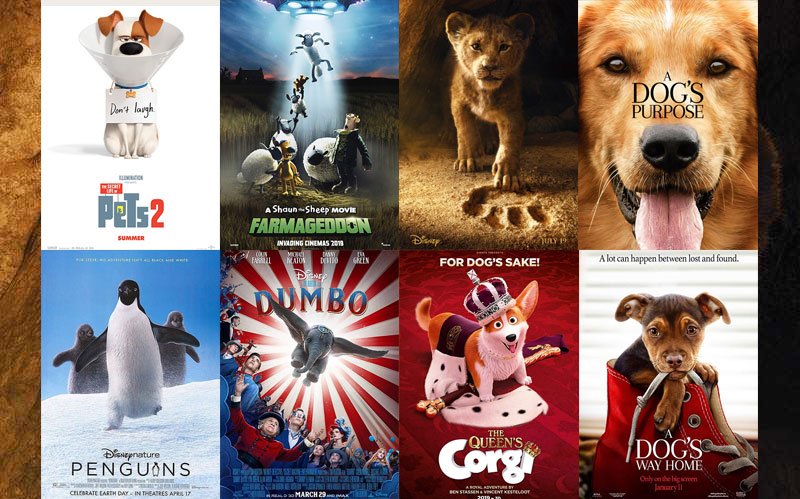 Does your family love pet and animal movies? Here’s a list of what to look forward to in 2019:

Separated from her owner, a dog sets off on a 400-mile journey to get back to the safety and security of the place she calls home. Along the way, she meets a series of new friends and manages to bring a little bit of comfort and joy to their lives.

“The Queen’s Corgi” is about the adventure of Rex, the British monarch’s most beloved dog, who loses track of his mistress and stumbles across a clan with dogs of all kinds confronting and fighting each other. During his epic journey to return to the queen, Rex falls in love and discovers his true self.

A young elephant, whose oversized ears enable him to fly, helps save a struggling circus, but when the circus plans a new venture, Dumbo and his friends discover dark secrets beneath its shiny veneer.

“Penguins” is a coming-of-age story about an Adélie penguin named Steve who joins millions of fellow males in the icy Antarctic spring on a quest to build a suitable nest, find a life partner and start a family. None of it comes easily for him, especially considering he’s targeted by everything from killer whales to leopard seals, who unapologetically threaten his happily ever after.

Audiences are invited along on A DOG’S JOURNEY, the next chapter of the beloved bestselling series by author W. Bruce Cameron. The family film told from the dog’s perspective serves as the much-anticipated follow-up to the soulful story of one devoted dog who finds the meaning of his own existence through the lives of the humans he teaches to laugh and love.


The Secret Life of Pets 2

The Secret Life of Pets 2 will follow summer 2016’s blockbuster about the lives our pets lead after we leave for work or school each day. Illumination founder and CEO Chris Meledandri and his longtime collaborator Janet Healy will produce the sequel to the comedy that had the best opening ever for an original film, animated or otherwise.

From Disney Live Action, director Jon Favreau’s all-new “The Lion King” journeys to the African savanna where a future king is born. Simba idolizes his father, King Mufasa, and takes to heart his own royal destiny. But not everyone in the kingdom celebrates the new cub’s arrival. Scar, Mufasa’s brother—and former heir to the throne—has plans of his own. The battle for Pride Rock is ravaged with betrayal, tragedy and drama, ultimately resulting in Simba’s exile. With help from a curious pair of newfound friends, Simba will have to figure out how to grow up and take back what is rightfully his.

When an impish and adorable alien with amazing powers crash-lands near Mossy Bottom Farm, Shaun soon sees an opportunity for alien-powered fun and adventure, setting off on a mission to shepherd the intergalactic visitor home before a sinister organization can capture her…can Shaun and the flock avert Farmageddon on Mossy Bottom Farm before it’s too late?