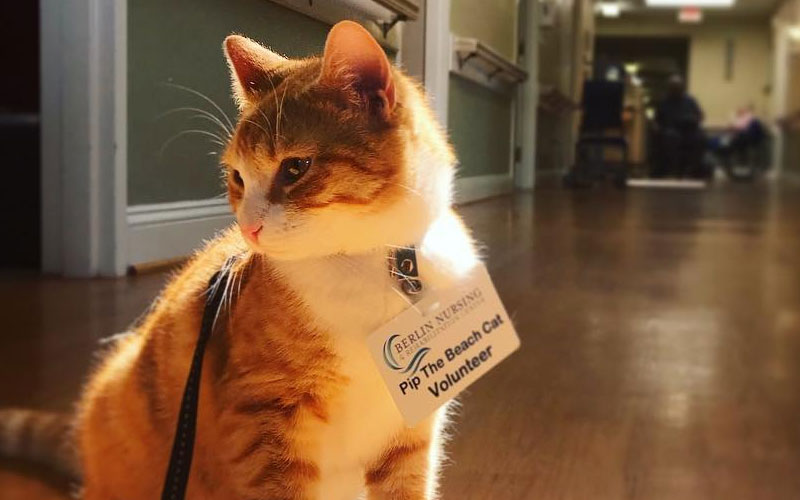 Pip was found alone in a thunderstorm in Maryland, and by chance, after being passed from friend to family member to friend (and denied at the local Humane Society because there was no room), Pip ended up in the home of Emily Meadows and Jacek Bulak.

Pip Becomes Part of the Family

Meant to only stay a short while, Pip’s touching antics soon made their way into the hearts of Emily and Jacek. They saw how unique and special Pip was, and he soon became a permanent family member.

To help give back to the community, Emily and Jacek decided to enlist Pip’s help in volunteering in their area. Today, Pip volunteers at the local nursing home on a regular basis — sometimes stopping by other events and community organizations as well. He is also an Internet sensation and a soon-to-be published author!

When Pip’s not spending time at the beach (which he loves!), writing children’s books, or responding to fans, you can find him volunteering at the local nursing home. With each resident who wants to spend time with Pip, he spends about 15-30 minutes.

This includes time with special dementia patients, some of whom are nonverbal. Spending time with Pip is an incredible opportunity for these patients, who are able to see, pet, and feed treats to him through his “bubble.”

Sometimes, Pip stays in his bubble, but other times, he’s free to jump up on the bed of patients and play with them there. Truly an entertainer, Pip can do tricks (like shaking hands and high-fiving), but Emily says that sometimes, he’ll just jump around and act goofy, explore the room, or take a cozy nap next to the person he’s visiting.

Pip’s visits to the nursing home and other community locations brings light to people’s lives. It’s an opportunity for patients to bond with Pip, who is truly a one-of-a-kind, “people person” cat. While Emily emphasizes that Pip is not a certified therapy cat (yet), we love his story of volunteering and enriching the Ocean City community.

Although Pip is a solo volunteer, several other programs also facilitate pet visits to places like nursing homes and hospitals:

Fun Fact: Pip’s story is definitely one of rags to riches as he was found alone and filthy in a thunderstorm, barely able to open his eyes, and with ears full of dirt. So, it makes sense that he was named after the famous orphan character Pip from Charles Dickens’ novel Great Expectations.

If Pip Could Speak

If Pip could speak, would he say he’s the boss of the place?
“I would love to say that I’m the boss of the place, but then my grammy and her friends would be mad, because they are the real bosses! And they work really hard. They have a lot of paperwork and things like that to do, but I just get to go and play with my new friends every week! My grammy is the head of human resources and she lets me take breaks in her office. To be funny, I always sit in her chair so that when she comes back it looks like I am the head of human resources! I’m not just there to make the residents laugh, but also the employees!”

What would he say about the great job he has?
“I love this job. It brings me so much joy. At first, I thought that it would be more rewarding for the residents, than for me. But now I know, that it is actually changing my life too. I love going to the nursing home because even though my mommy is volunteering her time, they still pay me- in shrimp treats!!!! It seems as though I only get these treats when I am “working” so I LOVE WORKING!”

Want to see more of Pip? You can follow Pip’s story on his website and also both on Instagram/TikTok (@ImFeelingPipsy) and Facebook (Pip the Beach Cat).

You can find Pip volunteering at Berlin Nursing and Rehabilitation Center and Harrison Senior Living.
[sp_wpcarousel id=”3194″]
Do you have a special animal you’d like us to feature on Pet Spotlight? Let us know!