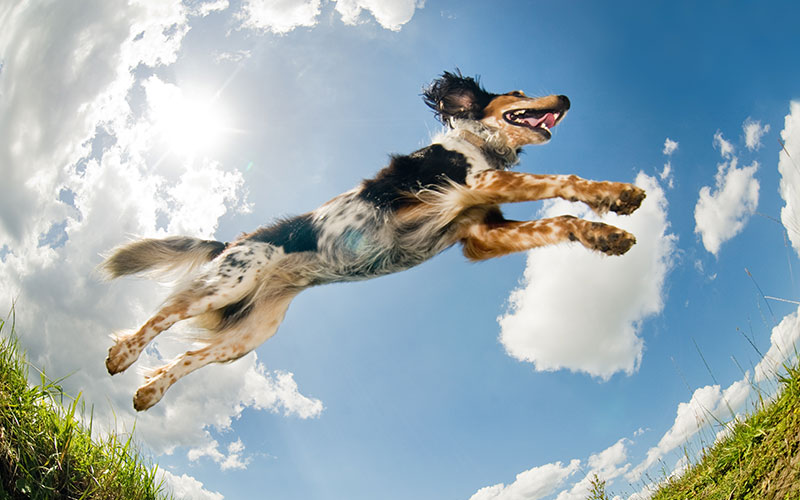 Did you know that your dog’s sense of smell is up to 100,000 times better than yours?

Of course, an awesome sense of smell is just one of the many super powers your pet possesses! Let’s look at a few more amazing things your pet can do.

5 Super Powers Your Pet Has That You Don’t

1. The ability to detect illness in humans

Dogs’ super sniffing abilities can do more than just detect sugar in water. Dogs also have the ability to detect illnesses such as cancer and seizures in humans. This could potentially save millions of lives through early diagnoses. Other diseases that may be detectable by our canine friends include diabetes, malaria, and Parkinson’s disease.

2. The ability to anticipate bad weather

While some humans claim this ability as well, animals are most acutely aware of the changes in barometric pressure that may signify oncoming inclement weather. Additionally, a heightened sense of hearing allows dogs, in particular, to hear far-off frequencies that humans cannot. These faint sounds might tell your pup that something big is coming — like an earthquake or a large thunderstorm.

Many dog breeds are master trackers, which is largely due to their keen sense of smell. But this super power works in other ways too — namely, to provide a “built-in GPS” system that can take them virtually anywhere they want to go.

Time and again, stories emerge of dogs who were all but lost before popping up again at the back door and surprising their elated families. When a dog is able to hone in and track a specific smell, the sky’s the limit on where it can take them! Cats, too, are able to use their special sense of smell to find their way home when they’re lost or far from home.

Both dogs and cats use their whiskers for much more than cuteness!

In fact, whiskers play a major role in how your pets experience and interpret their surroundings. Cats use their whiskers to help see in the dark. Even without touching their whiskers to anything physical, their hypersensitivity can detect the slightest bit of wind or movement, which may signify danger … or lunch.

Most pet owners already know this one. When you’re feeling angry, frustrated, or sad, you often show it in obvious or subtle ways. Your pets can pick up on this, especially dogs.

So, the next time you’re blue, keep a look out for a lick or nuzzle from Fido — this is their way of empathizing with you and offering their own form of comfort.

Didn’t know your pet was a superhero? Now you do! So … don’t you think he or she deserves a treat?